Well this this is my first blog of 2020 and unfortunately due to my hectic work load the first in some time.

I’ve been travelling 5-6 times per year to Italy for the last 25 years and have been to most provinces, but until Oct 2017 I had never been to Sicily. I have now been 3 times, and I now intend to try and get a trip in every year!.

Over the next few weeks there will be a series of blogs about my time at Sicilia en primuer in May 2019 and also my return holiday trip which I did in September.

During these blogs there will be a huge range of different types of wineries visited, many grape varieties you may not be familiar with but also amazing landscapes and of course I cant write about Italy with out adding in some gratuitous food shots too!

So lets give you some basic facts about Sicily and its wine industry.

Due to the sheer size of Sicily and the diversity of its landscape it really is like a small continent. Along its coast it’s pure Mediterranean climate but venture inland or to the mountains and its much more like continental Europe. The famous and still very active volcano “Etna” is close to 3400m (11,000ft) high. Also interestingly because there are so many micro climates on the island harvest starts in late July and goes right through until November.

Most people would associate Sicily with it’s enormous volcano with volcanic soils, however there are as many locations with Clay, calcareous and tufaceous soils too. Over coming weeks you will see more about these soils in my forthcoming Sicily blogs.

There are 98992 hectares of vines which is about 3.5% of all of the Island! It is the largest wine growing region in Italy in terms of this land, however it is only 4th in overall production as the yield per acre of grapes is lower than many other regions in fact some 40%. Average yields in Italy are 10200kg of grapes per hectare and only 6200kg in Sicily. (Figures from ISTAT). 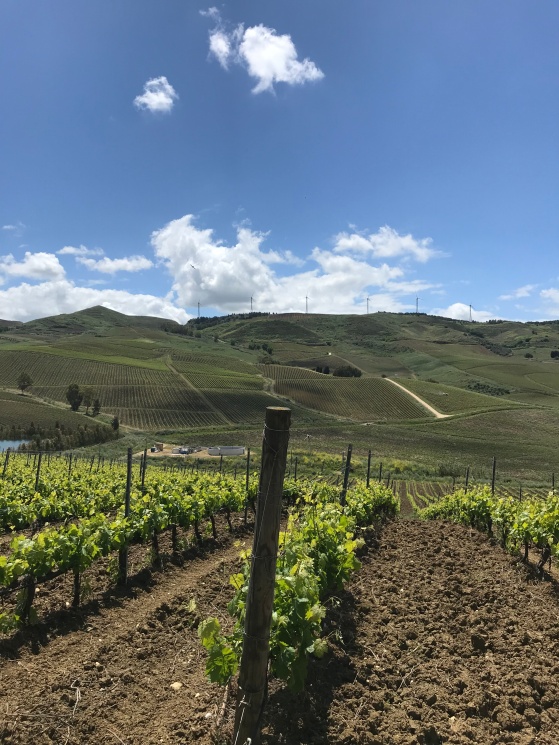 Sicily is often called the Island of sunshine, it has 2500 average hours of sunshine a year (about 2499 more than the UK haha) compared with only 2000 in mainland Italy and 1800 in the south of France. This additional sunlight allows for healthier vines and reduces the need for chemical products to be used.

Over 60 grape varieties grown on the Island and about 20 are native. Over the coming weeks you will read about tastings we had at wineries with grapes such as:

Also many non native ones too, Fabulous Voignier blend, Chardonnay and the Syrah is extraordinary too….. and before I forget… MARSALA fortified wine…. and of Course Passito desert wine.

The event is run by Assovini Sicilia which is an association of 90 Member vineyards with €300m+ revenues in wine sales. Their whole purpose is to bring more Sicilian wines to the worldwide market place. All of the 90 companies have three elements in common, these are 1) total control of the grape growing and wine making production chain from the vine to the bottle  2)Producing high quality wines 3) Internationally promoting their wines. Currently the market for Sicilian wine is 45% Europe, 31% USA, 16% Asia, 6% Oceania and 2% in the African market place.

Between the 90 they produce around 900 different wines. 95% of the companies produce controlled DOC or DOCG wines of which there are 23 DOC Siciliane classifications and 1 DOCG Siciliane. The quality is definitely rising here for sure, and the wine offers great value for money too. Also what most people don’t think about but the aging potential of some of the wines too. More about that later in future blogs.

They are also promoting come to Sicily and visit the vineyards. 40% even have accommodation and many provide restaurants on site too.

Just Sicily and Sopexa organised a fabulous trip, there were over 100 press from all over the globe.

I will leave you with a taste of what’s to come…. next Sicily blog in a few days

One Reply to “Sicily”