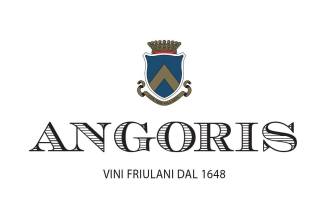 In January I was extremely fortunate to be invited to Passagio di Angoris, which was to be held at Villa Locatelli just outside of Cormons in Fruili, north eastern Italy.

So at the end of January I get myself on a plane to Venice Marco Polo airport, where I was meeting up with Jane & Chris Salt from Hay wines who import Angoris into the UK.  My plane landed late, in thick fog, in fact it was the first time I had been on a plane that had to be landed on autopilot as visibility was……… well actually there was no visibility. In fact the first time I knew we were close to the ground was when the wheels had touched down, to the great shock of most of the plane.

Finally after both of our planes delays we met up and picked up the hire car. Setting off through the fog easterly to our hotel. So after about 90 minutes we arrive at the hotel and so far we had seen absolutely nothing of the Friuli region as we only had about 100m visibilty on the highway! So we quickly dropped off the bags and got our glad rags on for the gala event in at Villa Locatelli. 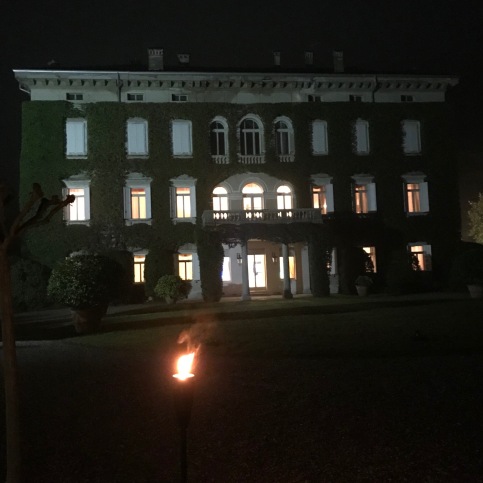 We arrived at the entrance gates to Villa Locatelli and proceeded along a stunning tree lined driveway which was beautifully lit with torches all the way down to the Villa, making this a very grand entrance indeed. We were definitely in for a very special evening. After our driver had dropped us off we were led to the tasting room for nibbles and a few delicious glasses of 1648 Sparkling wine.

This Brut sparkling wine is made from 100% Chardonnay in the classic method. The grapes are hand harvested, destemmed and then cooled in the winery, they then undergo a cold soak maceration directly in the press. After pressing, the wine is fermented in stainless steel tanks & left to rest on the lees 6 months. What is interesting about these tanks is they are horizontal tanks and not vertical tanks, this gives the wine more contact with the lees.

The wine is then bottled and it’s rested in for a further 30 months. Finally the sparkling wine is then placed in the pupitres for 3 months prior to disgorging. 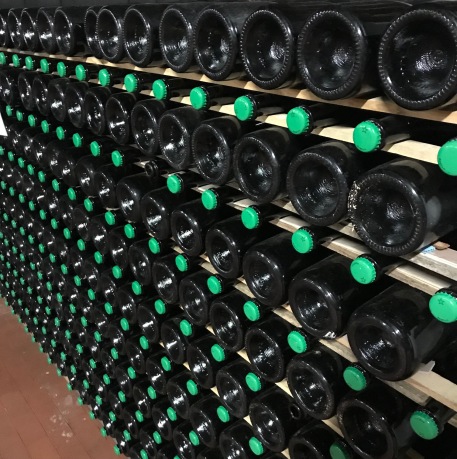 The 1648 Brut (named after the founding of the vineyard) is truly delicious. Straw yellow in colour, very floral with toasty bread notes on the nose. On the palate its a joy, persistent perlage makes the wine soft, but so fresh and dry (7g/l). The finish is creamy but with a mineral tone too. Delightful!

When everyone had arrived (fog!) we then moved to the villa for a fabulous presentation about the Angoris 2017 harvest.

The winter in Friuli Venezia Giulia was mild with low rainfall. After these early weather conditions, the temperatures were then above the normal average by the end of March, which lead to an early sprouting of the vines about 15 days before the year on average.

At the end of April, a mass of cold air reached the vineyards, lowering the temperature below zero in the night of April 21st. The shoots then slowed down their growth, due to the low temperatures of the days following the freeze. Luckily the losses were not too bad and thankfully not like many areas of Italy and France who suffered devastation of these early shoots by this frost around the 21st which has caused, in some areas, a huge reduction in the final grape crop.

Summer was then marked by heat but also key to a successful vintage was they also had enough rain which then supported a normal course of ripening for the grapes. These were excellent climatic conditions for the vines to obtain a perfectly healthy grapes.

So how will the wines vintage 2017 be from Angoris in Friuli?

For sure they are going to have top quality white wines, as some of the finest Friuli vintages, and the red wines will be smooth, scented & elegant, with lower alcohol degree.

The evening in the Villa had only just got started and we were in for a real treat of amazing foods and wines. Culminating with a launch of a new wine later in the evening. 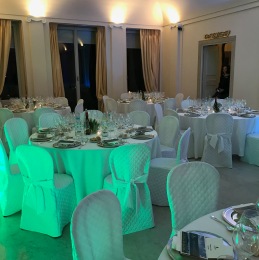 Amazing lighting in the villa had been set up and the whole room was constantly changing colours. IT WAS THE LIGHTS WE HADN’T STARTED ON THE MAIN WINES YET!! 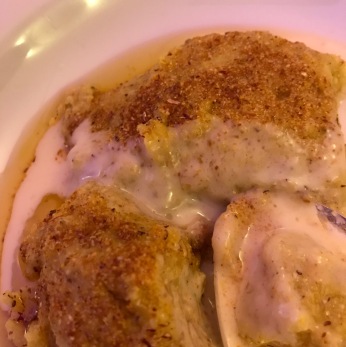 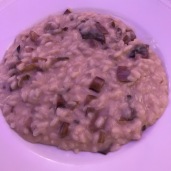 An absolutely delicious meal & wines followed….. The 3 wines to the left of the below picture have won 3 Bicchieri from Gambero Rosso.

Then we were introduced to the new wine. A new Pinot Nero DOC Friuli Isonzo.

So called as a dedication to Martha Locatelli’s (who is the owner of Tenuta di Angoris)  paternal grandmother.

Martha firstly discusses with us that Pinot Noir was once made in the winery in the 1970’s and how they are now developing wines again from the past. She also tells us that her grandmother, was a decisive person who (like her grandfather Giulio) was a great part of her childhood. Martha describes this Pinot Nero “Albertina” is just like her grandmother: “Elegant, determined, enveloping and comforting” and oh boy she is not wrong!

A great wine & my hat off to the winemaker Alessandro Dal Zovo, who features a lot in part 3 and who also trusted me with secateurs too on 65 year old vines….. UNDER CAREFUL SUPERVISION & GUIDANCE  I hasten to add.

This Pinot Noir is very impressive indeed, although not quite ready for market it still needed a few more months developing in the bottle.

“ALBERTINA”  is being launched officially at Vinitaly 2018. I will fully review this wine once launched after Vinitaly.

Now those of you who know my daily postings on twitter will see that I drink very little Pinot Noir, why?? hmmmm, that’s a tough one when I ask myself this question today. I guess its because years ago I just drank so many ordinary ones that were not that great so started to avoid! I only really enjoyed great Burgundy PN and that’s ……. expensive! However I have had some amazing ones in the past 12 months from all over the world and I am now converted back to Pinot Noir. I know you are all out there saying what an idiot!!! I second the IDIOT motion if that’s any help!

Albertina is simply delicious and I know will be a big hit for the Angoris. Production of this Pinot Noir will be quite low numbers.

Until this release all the estate Pinot Noir, was used in sparkling wines on the estate since the 1970’s 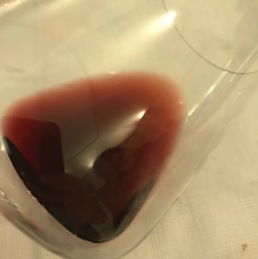 Now at the end of Part 2 of the Angoris blog I just want to thank Martha and the team for an amazing evening and for what the next day was about to offer too.

What is so clear from my first few hours at Angoris, was that although they are one of the larger producer’s in Friuli, their philosophy towards the land, vineyards & wines were so far from a large corporate company and very refreshing to see.

In part 3, I will be going into far more detail about Angoris and their mission to make wonderful wines, the environmental issues and how they let me loose with secateurs in the vineyard.