I have left the comical parts until the end to keep you all enthralled, please stick with it as don’t want to stretch to PART 4. haha

OK I’m now on a roll and they will be regular I assure you. 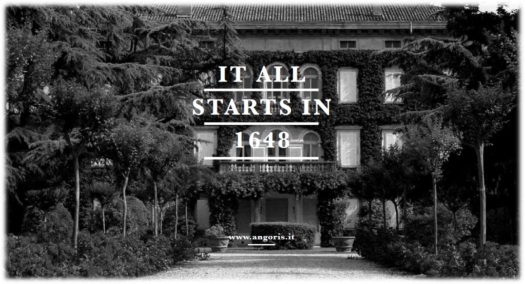 Well after the previous fabulous evening’s events and an early night……………. (no comment) we had to be back in the tasting room at 9:30 sharp….. OK we were on Italian time so give or take 30 mins ish.

We were told to wear warm clothing and to wear some good boots too. By the way the fog was lifting enough to see Friuli for the first time in full techno colour! We were definitely in wine country. Vines, vines and more vines.

We had already had breakfast before we left the hotel but on arrival we were greeted by great coffee……….Would you expect anything else from Italians!) and some delicious pastries too. Well we were going out on a winery tour in the cold and possibly having to do some work in the vineyards too…… so plenty of both was consumed by me.

So everyone (as predicted within 30 mins of allotted time) had arrived and it was time for a winery tour.

I mentioned in Part 2 that although Angoris is a large producer in Friuli they are far from a huge commercial bash out the wine type of business.

So what are they about then?

Martha Locatelli started to tell us about their Sustainable development program and that economic growth by itself is JUST not enough, development is real only if it improves the quality of life in a long lasting way for the future generations. For environmental sustainability it means the ability to enhance the environment as a “distinctive element” of the territory, while ensuring the protection and renewal of natural resources and heritage too.

To this end it must be always be 3 ways, these are fundamental & inseparable for development of Angoris. Now for quite a large producer 100,000’s bottles per year this is no mean feat.

Now I know that’s all very easy to say…. however below is what they have achieved since 1997. Please take a minute to take this in. Some of you might think that this is me just rambling on about ECO this and ECO that, but really many wineries have to step up to the plate too, they cannot be just about how many bottles can they produce. It has to be about the future generations of vineyard owners too. Now this does not have to be that all wines need to be natural, Organic (many wineries follow the Organic principles but they are too close to their neighbouring vineyard that still sprays insecticide etc) or by bio dynamic principles. Sustainability is key to a successful vineyard.

Since 1997 they began a process for improving the energy saving in the winery and increasing the purchase of modern equipment for sustainable management of the vineyard and the cellar.
1997: it was possible to reduce the use of water for cleaning the cellar thanks to a winery water well.
2001: a careful process of reforestation started, which has had as result 35 hectares woods in the company property, composed of different species of trees.
2010: They bought special machinery to recover the product during the treatments in the vineyards, it helps us to avoid the waste;

2014: with the target to obtain agricultural products through a low environmental impact they have agreed to:
1) Integrated production: a system of agricultural production, which uses all the means of production and for the safeguard of agricultural productions from adversity, with the target to minimize the use of chemical substances and rationalize the agricultural fertilization, respecting the economic, ecological and toxicological principles.
2) S.Q.N.P.I.: National Quality Integrated Production System;
2015: Usage of last generation wine filtration system, which permits a total elimination of pollution by-products (flours, filters);
2015, 2016 and 2017: They receive the award Ecofriendly, founded by Verallia in collaboration with the guide Vinibuoni d’Italia. It is an award, assigned to the companies and to the consortium, that stand out for their dedication to the environment sustainability values;
2016: They now use modern machinery for mechanical removal of the grass and infestant plants in the vineyard, removing totally the chemical weeding;
2017: Now have obtained agroclimatic environmental compliance with regard
to membership of SQ.N.P.I. for the year 2016. 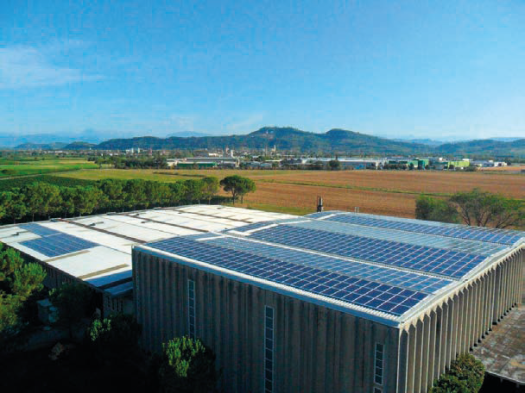 In 2013 a photovoltaic system of 1800 m² and 200 kw has been installed on the roof, this helps us to avoid the emission in the atmosphere of several hundreds tons of carbon dioxide every year.

Well we walk into the winery and they are old school and also state of the art when it comes to machinery.

We then had a masterclass from Alessandro Dal Zovo, the winemaker at Angoris on the 1648 Brut Spumate.

Then we tried the 1648 with No dosage (no added sugar), it’s delicious, so fresh with huge green apple fruit and vibrant acidity. I know its not to everyone’s taste to have a wine with no dosage but I always love to try it. When you taste wine with no additional sugar added it truly shows the quality of the wine making. Often, sugar is used to mask faults that a wine may have but when tasting NO DOSAGE you can truly have only brilliant wine. What it also shows is the confidence in Alessandro’s ability as a wine maker to produce a superb product. You would not offer a NO DOSAGE product to all of your distributors at a grand event if it was not superb wine. The 1648 is normally 7mg/l of added sugar so its still pretty dry.

Off out into the vineyards:

Villa Locatelli is a total of 630 hectares  – vineyards, woods and arable land
85 hectares of  vineyards in Collio, Colli Orientali and Izonzo regions of Friuli
50 % wines sold in Italy – 50 % wines exported to 35 Countries in 5 Continents 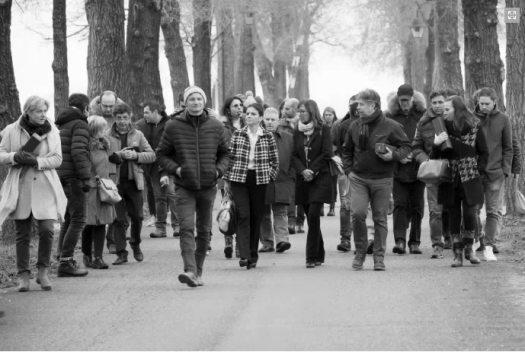 We then moved onto the Pinot Gris vineyard behind the winery to witness the demonstration of some a state-of-the-art machinery which eliminates the grass/weeds etc. on the sub-rows of the vineyards. This equipment allows Angoris to join the system of National Quality of Integrated Production, without the use of pesticides. Its’ incredible to watch this equipment at work. As the sensors touch the vines it carefully goes around them as to not damage them, but gets everything else in between!

From the 2 pictures above you can see how these old vines are developing. What is really interesting is how much stone there is in the soil. These were ancient flood plains hence so many small stones.

After the Pinot Gris vineyard we all got onto a coach and travelled through Cormons onto the small town of Rocca Bernarda. We then meandered, for a couple of miles, up a small winding road. (poor coach driver, would have been hard enough in a car!! although didn’t seem to phase him one bit) 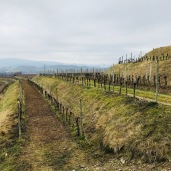 These terraces are pretty steep but that’s not the challenging part to this land. Its only a few feet below the surface that is all rock.

The walk from the road though the vineyard with the mountains in light fog ahead of us was truly magical. It was fresh day, it had rained through the night and into the early hours of the morning and the fog was finally clearing! What is interesting is that although it had rained quite a lot, it was not really wet under foot. It had all drained down through the soil and into the rock below. I’m hoping that the vines roots grabbed some on its way past!

This vineyard is in the eastern hills from the Angoris winery and we are now looking out over Friuli to the forests of Slovenia which are only about 6 miles away.

We kept walking until we reached a sign saying that we had reached the rows of Tocai Friulano vines which were planted 65 years ago.

I was then given these (see below) …… Disguised in a wine box, could have done with a glass of wine about now, when we all opened our boxes to find Secateurs & gloves. We were to have a pruning masterclass.

Note to self at this point… PAY ATTENTION TO Alessandro or I am going to destroy a 65 year old vine!

Its a good job that I had a clear head and didn’t spend until the early hours in the hotel bar with some other distributors after the gala event the night before………….. PHEW!

So Alessandro showed us on a few vines.

3 things to concentrate on….

So its my turn…….. Drum roll please….. getting prepared……

So after our masterclass I think I pretty much knew what I was doing.

So the easy bit was getting rid of the branches growing in the wrong direction. What I mean by that is that they are growing towards you and away from you. These are no good as you want them to travel left and right on the trellis and not everywhere. OK these were eliminated…. all going to plan so far. So all the old stuff out the way I have to decide on this years left & right branch and the year afters buds too.

Well I thought I would talk through with Alessandro exactly my plan…. his response VA BENE! (it’s all good in Italian) not really surprised because I was obviously a natural he then said cut away! I am joking slightly here over an extremely, even most, important job in the vineyard… (by the way I wasn’t joking that I was a natural pruner extraordinaire!)

After my little bit was done Alessandro said …. great job you are a natural pruner, you have the job, Obviously I was super pleased with the praise until he said only 85 Hectares to prune…. this job takes 25 people full time (subject to weather) 4 MONTHS!!! GULP! Wow that really is an extraordinary amount of work all done very carefully by hand, you cant take your eye off the ball as you may be OK this year but you were not looking for next years BUDS!

When everyone had had a go pruning (not up to my standards obviously) they said time for a snack, so back up the vineyard towards where we had left the coach… I say that because it had now disappeared.

Well we were now greeted by a feast of sausages, lardo / bread and mulled wine to warm us up. 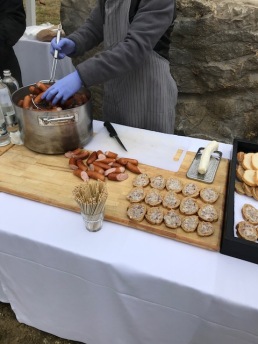 So delicious and just what we needed as it was January after all….

I then noticed that the coach had come back into view… phew didn’t want to walk all the way back. In true Italian style (as we had just eaten) it’s now time to get on the coach as we are going for more tastings and lunch.

So now we arrive at a restaurant, Its owned by Angoris and almost before I got through the door a glass of wine was thrust into my hand by one of the waitresses… Don’t mind if I do! Oh boy it was delicious, an Angoris Pinot Blanc and just what I needed after my endurance in the vineyard.

We then proceeded to try another 6 wines from Angoris and a delicious Buffet lunch. Loved the food…. OK the wines too haha.

So when we were finishing, I got to see the real Angoris, Martha showed what she and the company are really about.

Martha called in every member of the Angoris staff one by one that had been in involved in Passagio to huge rousing applause for them all. You knew it was with heart felt joy for each and every member of staff, that had made the Passagio dal Angoris a wonderful success and that all attendees had had an amazing time.

It’s not just a company it’s a family, staff included!

I will never forget my couple of days at Angoris… Actually I can’t wait to go back.

It’s been my absolute delight and pleasure.

2 Replies to “Angoris Adventure – Part 3 When they let me loose in the vineyard…..”