Just over 30 miles south of Florence lies the beautiful hilltop town of San Gimignano, with majestic towers and stunning vistas across the Tuscan countryside.

Six miles east you will find the beautiful tiny hamlet of Campochiarenti.

The Campochiarenti history begins at the end of the 10th century when the church of Saint Nicholas was built (finished in 998). 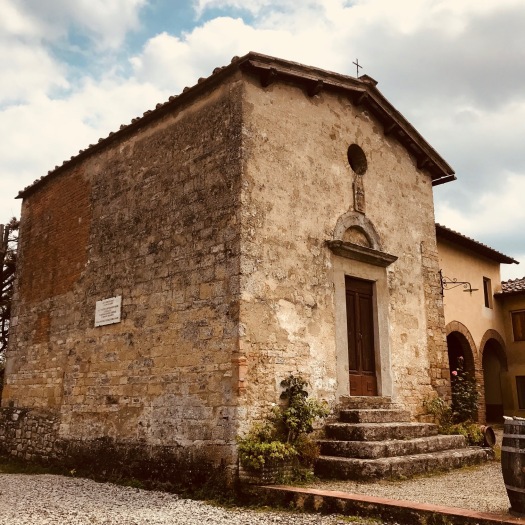 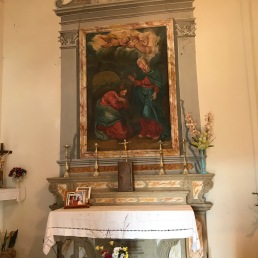 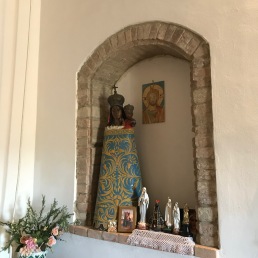 Inside the chapel is very tranquil, it even has a tiny confessional booth, I didn’t use as we could have been in there all day…. Forgive me father but I have consumed the odd glass of Vino…. on a daily basis….like forever….haha

This church is named in the “Bulla pontificalis” (official document signed by the Pope) made by Pope Alessandro II in 1070. The power of the owners increased between 1100-1200 because of its alliance with San Gimignano.

San Gimignano was in allegiance with Siena, which was a power house of a city in Italy at that time, however always at war with Florence. The Florentines wanted produce and San Gimignano was rich with spices and oil so Campochiarenti became the go between. The small hamlet around the church was originally built as a convent, which then became the trading point for the Florentines. 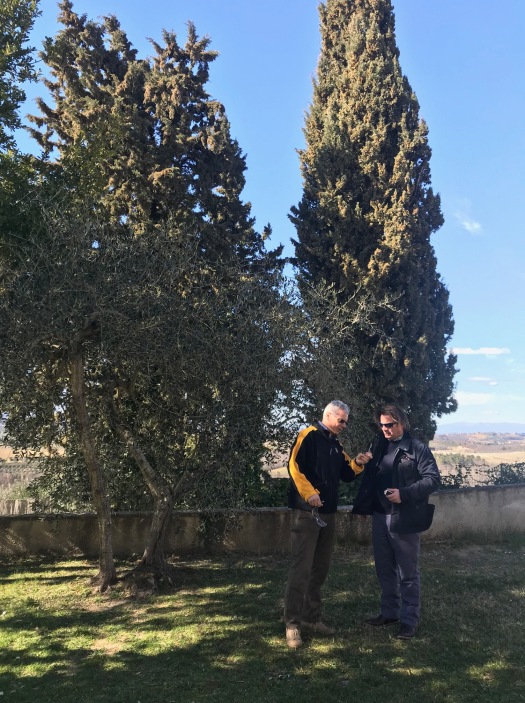 Wine & olive oil has been sold from this site since 1276. Vernaccia is one of the most important wines in Tuscan history as over the centuries it has maintained the same single grape variety and quality characteristics.

Today the estate is owned, including the little church, by Daniele, the estate was bought by his father back in 1977. He then started renovating the hamlet and bringing the vineyard back to its former glory as it was not in the best of condition. Nearly all the vines were replaced 40 years ago with better clones which they knew would enable more control of the quality of wine. Additionally there were also more vines planted ten years ago. The estate is just over 120 acres, 34 of which are the vineyards, there are also about 1000 olive trees.

Vernaccia di SG is a single variety wine although they have a few different clones on the estate enabling small changes to the flavour profile and structure when making the wine.

Over the last 25 years the vines have been treated by cutting out any infection, using a chainsaw very carefully I might add, to keep the old clones alive and well.

It’s about low production, the main concentration is top quality fruit. There are no weed killers used, all the weeds are mechanically or manually removed. They are not an organic vineyard as they sometimes use products to deal with pests or disease. Daniele believes for the best grapes its important to minimise the affect of any products used. It’s about using the 1000 years of experience of many generations with these ancient varieties for the best results.

The key word here is NATURAL, the wines are made as naturally as possible with minimum intervention in the vineyard and with the winemaking.

These images above are from the nightly digging of the Cinghiale, WILD BOAR! They like digging for the roots of the weeds, lets hope they leave the grapes alone.

Their terroir is made up mostly of sand and lime soil, although millions of years ago this area was under water…. it was the sea. Because of that it has very rich mineral soil with many fossils of sea creatures in it too. This provides a beautiful minerality to the wines. 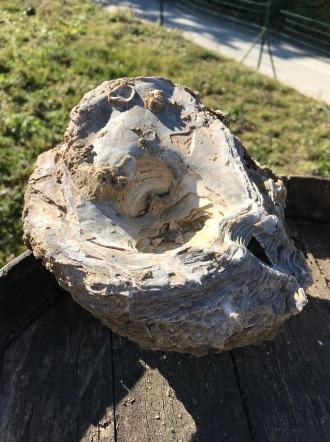 On to the winery,

For a fairly small production winery, Campochiarenti has everything in house, from the grape press, tanks & barrels, to bottling the wines and of course storing them for aging too.

As you walk into the tank & barrel room its quite impressive as the first thing you see are large HL95 (12,000 Bottles) concrete tanks that were built in 1956.

As you can see from this huge tank 12k bottle tank the wall thickness of the concrete is about 10 inches so the temperature inside is very stable no matter what the outside temperature is. The outside of the tank is painted in a light colour to add more light in thee winery and to deflect heat also.

These tanks have a special non transferring resin coating specifically for wine due to the high acidity when the wine is fermenting. This coating allows the tank to be meticulously cleaned for the next use, as after clarification the deposits need to be blasted out so its squeaky clean inside. Although there is a hatch in the top to allow access inside I really wouldn’t want to be in there to clean it!! Claustrophobia would soon set in.

The grape process for these tanks is quite simple.

In this part of the winery there are also various sizes of steel tanks and large Slavonian Oak barrels. 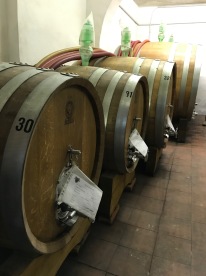 Daniele uses large format oak barrels up to 20HL (2660 bottles) from Garbelloto who are based in Conegliano, Veneto in northern Italy. These guys know something about barrels…. they have been making them since 1775. It is key that the barrel room has high humidity to prevent evaporation within the oak barrels as without humidity you can lose up to 50 litres per year.

I asked Daniele, why do you use large format barrels and not Barriques that I see so often in my travels around Italy.

“For me its about producing more traditional wines, a large barrel allows more control over a longer period of time. A barrique barrel at 300 bottles is nearly 9 times smaller than the barrels we use and only has a wall thickness of 20 to 24mm so the wine has far more contact with the oak. With our large format 20HL (2660 bottle) barrels there is a lot less contact with the oak and the wall thickness is 40-70mm so the flavour from the oak is softer and a much slower evolution of the flavours in the wines. For us it’s an ancient tradition of using the large barrels”

Onto the bottle aging room, where the magic finishes in the bottle. 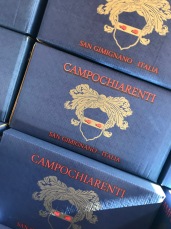 What is very clear here is that Daniele is doing something extraordinary compared with most of the producers in the area.

The reason I say this is most people making Vernaccia di San Gimignano are releasing the wine within 6-9 months and meant to be consumed within 1-2 years…… as opposed to Daniele that wouldn’t even dream of releasing that early as the Vernaccia is still in the making.

Proof of this was the 2009 we had during the tasting.

The tasting will be in part 2 next week.

Just for the record I have become good friends with Daniele over the last few years and have enjoyed some great meals and wines together in Florence, however I am writing this completely unpaid and because he makes epic wines!!

3 Replies to “Tuscan Heaven at Campochiarenti”