Just in case you missed the first part of my Campochiarenti blog here is the link.

Well after a fabulous albeit very windy tour of the vineyard and the winery it was time to taste the wines.

Well the first sample was not wine… It was olive oil.

So a little introduction into Campochiarenti’s olive oil production, their philosophy is very simple. To make natural olive oil, nothing sprayed on the tress nothing added in production, just natural.

The process is as follows.

The Centrifuge is used because amazingly there is a massive water content in the olives. For every 100kg of olives you end up with between 11-14kg of oil only.

The ideal growing season is for some rain at the beginning of the summer and then a dry hot summer, with little rain during the season as the olives are not harvested until October. If they get too much rain in September all that will do is make the olives bigger and fatter and all its actually doing is adding water content therefore adds nothing to the production of the oil. These days the hot summer is essential as there is a fly that is becoming a menace within all olive growing regions. Its an Olive fruit fly that lays its eggs on the olives and the larvae eat there way out! Hence a real nightmare for the growers that want to grow naturally and not spray to kill these flies.

They bottle the olive oil in their standard wine bottle as they want to show everyone that this is an artisan product of small production.

The oil was so smooth full of flavour and was a delight with traditional Tuscan bread (NO SALT). Just a quick note, sometimes you get olive oil that has a bitterness to it and this is due to harvesting unripe fruit, usually for mass production and when you taste these small production oils they are a world away from this mass production taste.

Before I move on to the wine tasting I have to tell you about visiting San Gimignano that morning. I was amazed as outside all the wine shops there  were little 3 bottle carry cartons and these were all Vernaccia and also Chianti….. THEY WERE ALL €12 per pack! Seems the coach loads of  tourists will never understand the great wines of the area if this is their only introduction to these great  wines. There are amazing producers locally  without spending much more per bottle. About €6.50!

Well let me tell you that Campochiarenti is far from the normal production of Vernaccia and Chianti in the area. Daniele is making the wines in the same way that they have for centuries. 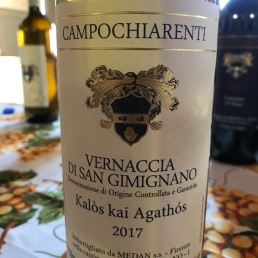 The first bottle opened is Kalòs kai Agathós, which is 100% Vernaccia.

Basically the old philosophy says that what is made in a good natural way for the city and citizens comes back to be good for everyone. Was also used for Sculptures and politics too. Its all about respecting the beauty of nature.

The wine, this is the 2017 vintage, is the first bottle that Daniele had opened. Hugely honoured Daniele. (FEB 2019)

In the glass its a pale straw yellow in colour with golden edges, Its fresh on the nose, with a zesty touch. Serving temperature is important for Vernaccia to really let it shine. Its very much a food wine and should be served at around 10-11ºc. At this temperature it pairs beautifully with fish dishes, as the wine gets warmer 12-17ºc it then is fabulous with pasta, chicken and pork.

The key elements of Vernaccia are for sapidity (a saline note) almonds, ripe fruit flavours and white flowers. These all change depending on vintage but I think its best to get an overview for the variety when done well.

Daniele adds no sulphites to his wines.

So unlike most Vernaccia, this wine has only just been released on the 1st of March this year, has been in the concrete tanks since harvest and pressing for fermentation, then filtered with natural bentonite sand. Then when ready it gets bottled and laid to rest until release. Normally Vernaccia from other producers would class this as a riserva but for Daniele its the standard. 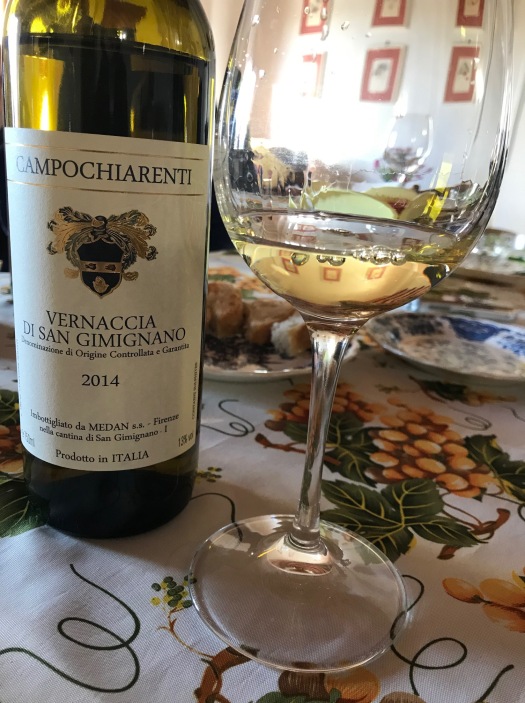 These next two Vernaccia di San Gimignano really show how the variety evolves over time. the 2014 & 2009.

I have visited Daniele in 2018 and had previously tried the 2014, so I thought I knew what I was expecting….

NOPE! Completely changed in the last year, the colour is still straw bright golden but when you put the glass to your nose this is where the evolution of Vernaccia is really coming into its own.

On the nose it was pure caramel, toffee, smelled so sweet it was like smelling a desert wine. The green notes and herbaceous notes have subsided.

On the palate its nothing like it smells…. No sweetness, its fresh ripe green apples,  and almonds, and its full and rich on the palate. The finish has a sapidity , mineral and long satisfying finish.

2009, Well this poured into the glass and looked the same as the 2014, even though now this white wine is ten years old.

What was instantly obvious on the palate is how again different this wine is from the 14′  More fruit, yet much fresher even though 5 more years of aging. Similar in fruit profile but now with the slightest hint of balsamic and also fresh mint too.

NO OAK is used in making these white Vernaccia wines, the rounded full mouth feel and development is from the period of aging only.

It will be fabulous to see how this wine evolves over the next few years and how long it will actually age for. Based on how fresh this 2009 is currently and the levels of fruit and acidity still in the backbone of the wine I can see this may go another 10!

On to the REDS 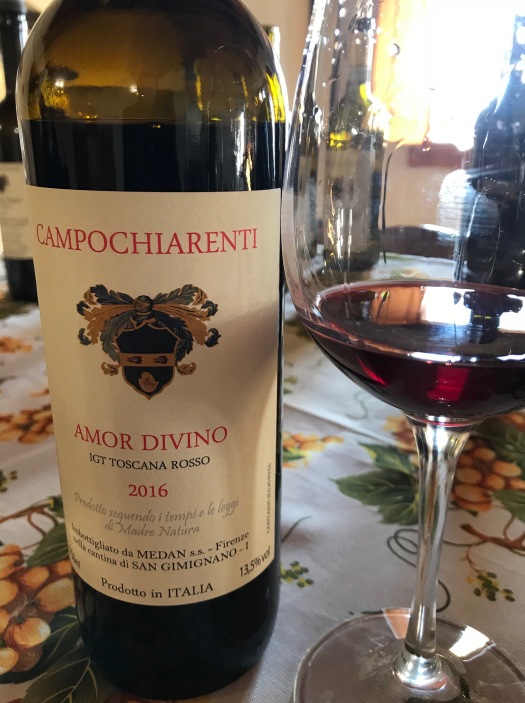 Sangiovese 85%, them 15% blend of Tuscan varieties of Canaiolo, Colorino, Ciliegiolo, Mammolo e Foglia Tonda. All these grapes are planted across Tuscany and mostly used as blending grapes for Chianti. However there are some producers that make wine exclusively from these varieties too, although not so many. Even the Foglia Tonda has a couple of producers making single variety wine…. even though most people will never see or even hear about some of these wines.

Fermented in the cement tanks and then a long maceration on the skins.

Cherry on the nose and palate, feels big on the mouth feel, no oak at all but because of the long maceration on the skins this gives it a big feel. A great value wine at €6.50 from the vineyard to order direct.

Now onto Chianti, Campochiarenti is in the Colli Senesi area.

People get confused about Chianti.

A quick idiots guide for you below (sorry for all the people that know!!)

8 Areas of Chianti in Tuscany

and in Chianti Classico only, Gran Selezione. It can be confusing! One key thing that you need to know is that Superiore is made in six provinces across Tuscany and the only difference between this and standard chianti is that its from estate grown fruit…. so actually might not be superior at all.

Sangiovese 85% and Canaiolo, Colorino, Ciliegiolo, Mammolo e Foglia Tonda 15% so a similar makeup to the IGT Amor Divino however this has spent time in large OAK barrels, this changes the profile completely. Its forest fruit on the palate, the addition of the large format oak gives a silky roundness to the wine without a huge vanilla and toasty input.

Even though there is 30% Merlot, it doesn’t feel like it at all. The clone planted is early ripening so gains so much from the summer sun and does not feel dominant in the blend at all, but obviously gives the wine depth and of course flavour. Its a big wine, 30 months in 550 litre oak barrels then bottle stored until release. Sublime black & red fruits enveloping your mouth in a rich and silky delight, the finish is so long.

The balance of this wine 12 year old is wonderful, tannins, acidity and fruit all balanced though each still powerful so this wine has many years of aging. It could really be drinking well in another 12 years.

I talked at length about aging the wine with Daniele.

“I release the wines when they are enjoyable to drink, however if you wish to store you are more than able to for many years. If you want to see the development of a wine its best to buy a few bottles and see how the wine evolves over time”. GREAT ADVICE TO FINISH ON.

I did add the disclaimer in my last blog but I am not paid by Campochiarenti I am writing because Daniele has become a good friend and more importantly his wines are brilliant. I wouldn’t be writing about them if they were not.

Distribution is so hard for the smaller producer and although he distributes to many places, there are also many places that there are no distributors. But the great news is you can buy directly from Italy and the freight cost wont kill you as the wines start at €6.5!! only.

2 Replies to “Campochiarenti Part 2 – The tasting”